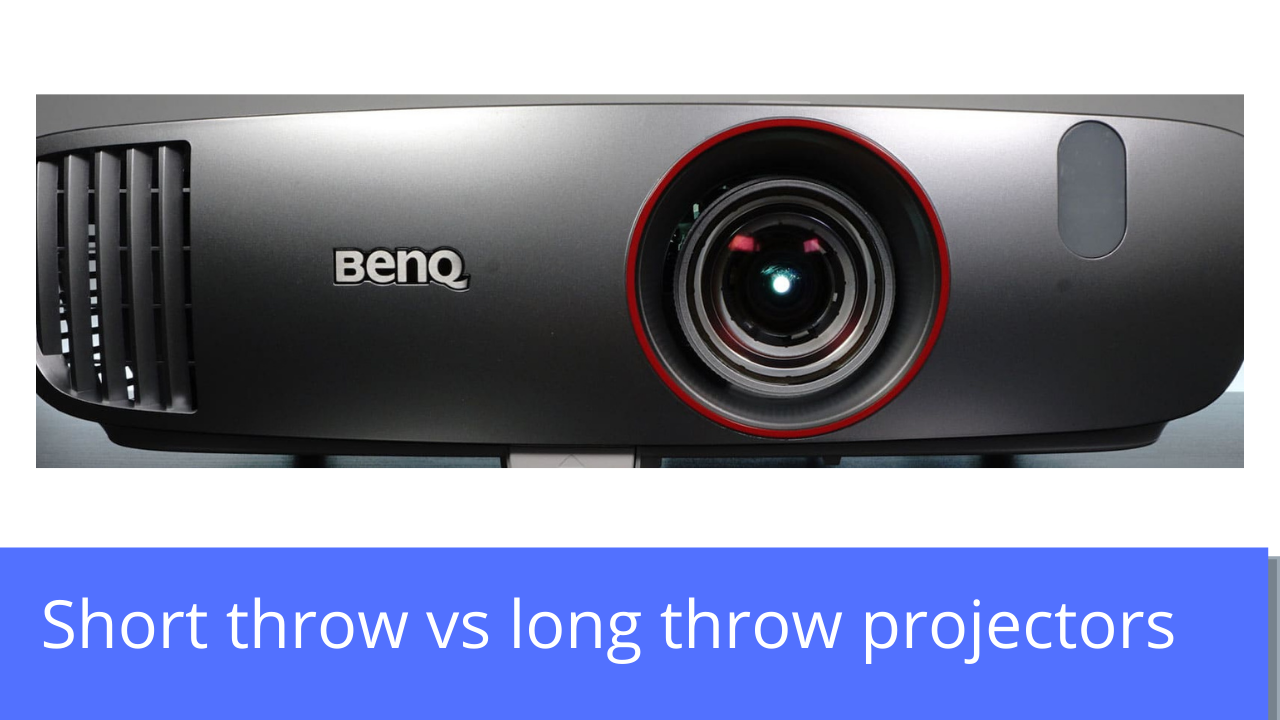 So are you deciding to buy a home theatre for you that can elevate the fun and enjoyment so that you can play and stream on a big screen with your family and friends and you do not have to step out to avoid the daily boredom? But when you plan to purchase a projector for you, then a lot of features become hurdles in the way because you are unaware of many specifications related to the projector like contrast, brightness, resolution, zoom range, etc.

At that time, the decision will become hard, and it becomes even harder when you have to make a crucial comparison between short throw vs. long throw projectors. So if you are also in confusion what to buy, read this detailed difference and know your preference and suitability.

Let’s move ahead without further ado!

What is Throw Ratio?

Short throw vs. long throw projectors is a straightforward question if you know the basics. The most basic among all is the central aspect that distinguishes both projectors from each other and is the position to a place of the projector relative to the projection surface, which is also known as a screen because it decides the throw distance and displays the picture on the projector.

Let’s have a look at both of them!

Mostly the projectors are placed close to the screen to get a larger-sized image because of the intended lens in the projector. The throw ratio of the short throw projectors is between 0.4 to 1, so the image will increase in size or width by about 1 to 1.25 feet when you pull back the LCD projector a little. The increase in the width of the image is due to the chip that transforms the geometry of the picture, and this is the reason for which the angled projection appears as a normal rectangle on the screen, and this is why it generates extra heat as compared to the long throw projectors.

Advantages of the Short Throw Projectors

Short throw projectors are very beneficial in some aspects, and you can relate those aspects with your preferences, and if they suit, you then buy a new short-throw projector without wasting a second and make your home theatre the best corner of your house.

Let’s move towards the advantages of short-throw projectors offer to you!

The short-throw projectors are placed nearer to the screen to get a clear image; that is why they do not need more space for the placement, so you can use that extra space to move quickly and place other home theatre-related things like a sofa, chair, and table, etc.

When you place the projector near the screen, it will require less space, and ultimately, you can easily move around the projector. Moreover, the projector will never be a hurdle to move, and hence you can prevent the projector from the possible damages that come when it gets bumped by someone walking by.

As discussed earlier, these projectors are not far away from the screen and allow people to move around easily without any obstacles. You can avoid the annoying shadows that usually spoil the fun when watching movies or playing games with Xbox.

Just like the advantages short-throw projectors offer to you, they have some disadvantages that you must not ignore if you want to purchase a short throw projector for your home theatre.

Scroll down to explore them!

When the projector works for displaying the picture on the screen, it first wraps the picture to be displayed at a specific angle, but for the clear image, the surface should be smooth; otherwise, the uneven surface will cause more image wrapping.

Short throw projectors require more processing power to convert the rectangular images into trapezoid cables; that is why they become hotter and may cause some unrepairable damages. Moreover, this phenomenon causes a noise for which the fans in the internal unit become activated and decrease that noise.

Long-throw projectors are placed far away from the screen, and they project an image on the screen that is smaller in width than the projector’s distance from it and hence more throw ratio. These types of projectors have some pros and cons.

Let’s explore what benefits they offer to the users!

Long-throw projectors project the images over a long distance, and that is why they do not need to place them right in front of the screen so you can have fun by placing them anywhere in the room because the concern is a clear image.

If a long throw projector is placed on an uneven surface, then it will not cause image wrapping or distortion, so you can even place it outdoors and larger rooms on uneven surfaces.

Unlike the short-throw projectors, these projectors do not need to transform the geometry of the projected images; that is why they are affordable in price.

Because the projectors have to be placed at some distance so require more room, and when someone moves into the room, it spoils the overall fun by generating annoying shadows on the screen.

These projectors need more usable space in the home theatre, and that is why you can not place something else in the room that will cause a hurdle in the back-light.

Choosing the right projector for your home theatre is crucial if you want to enjoy the real fun of the home theatre. According to this upper illustrated guide, the two major types of projectors are discussed: throwing the light on the short-throw vs. long throw projectors and explaining all the related aspects that must be considered while purchasing the one.

No comments to show.